You are here: Home / Community Information / “Joe Angelini, A True Servant To His Community” Interview

“Joe Angelini, A True Servant To His Community”

Our community is blessed to have many wonderful people who give generously of their “time, talents and treasures,” but few embody the principal, “to serve and protect” like that of Punta Gorda Police Officer, Joe Angelini.

While I have had the opportunity throughout the years to make many friends within the department (one that does an amazing job in protecting its citizens), there is a common core principle each officer I’ve met seems to embrace, “service to the community”, and none epitomizes this more than Officer Angelini.

Raised in Conshohocken, Pennsylvania, a small town outside of Philadelphia, Joe attended Plymouth -White Marsh High School where he excelled as an athlete. Graduating in 1977, his mother, now remarried, moved to Florida while Joe stayed behind a year to work with his dad, but in 1979 made the move to Florida himself. Now as a 19-year-old, Joe realized his dream of becoming a professional athlete didn’t seem as realistic as attaining his other goal which was to pursue a career in Law Enforcement. So, in 1980 Joe entered the reserves with the Charlotte County Sheriff’s Department , then under the supervision of Sheriff Alan Le Beau. A year later Joe would become a full time deputy sheriff before rising to a supervisory level four short years later, a position he held from 1985 until his retirement in 2006.

A year later, then Charlotte County Sheriff John Davenport, asked Joe if he would consider coming out of retirement to mentor the new deputies. When several days passed and Joe hadn’t responded to Sheriff Davenport’s request, future Charlotte County Sheriff and friend Bill Cameron reached out to Joe and told him he was surprised he hadn’t responded to Davenport’s request. Joe agreed to accept the position which he held for a year. It was during this time Joe recalls a funny story of a young officer by the name of Butch Arenal who was a civilian working in the private sector . When Joe arrived on the scene of a domestic violence call, he noticed Butch sitting alone in the front seat of the squad car and asked what he was doing sitting there. Butch told him that his uncle responding officer at the time told him to stay in the car while he went into the home to investigate. Joe replied, “You’re not going to learn anything sitting in the car. Follow me, I’ll cover you,” as they proceeded to assist the officer on call. It was a friendship that lasted for years as Butch went on to become Punta Gorda’s Police Chief and it was under his tenure when he asked Joe, who was now an active officer with the Punta Gorda Police Department, if he would like to take on the role of School Resource Officer at Sallie Jones Elementary School, a position Joe embraces to this day.

While much can be said about Joe’s 33-year history in law enforcement, 27 with the Sheriff’s Department and almost seven with the Punta Gorda Police force, Joe has an equally impressive track record of giving back to his community which dates back to the mid 1980s.

One of the first charitable events Joe created back in those days was “Cops Who Care” where proceeds went to feed less fortunate families throughout the community. Joe was able to recruit the area restaurants to supply the food and Walmart to provide the toys, with local judges, attorneys and community leaders serving up the treats. 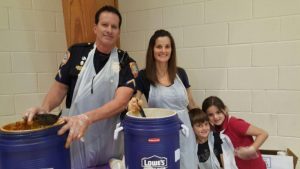 He also created a basketball game pitting officers from the Sheriff’s Department against the local attorneys. Now I’m not sure after seeing all those Morgan and Morgan advertisements on T.V. that I would want to play basketball with a bunch of trial lawyers, but back in the 80’s things were different and proceeds went to benefit the “Star Program.” This program provided financial support for those experiencing debilitating illnesses and birth defects, one of which was Down Syndrome, something close to Joe’s heart.

With his love of sports, Joe has fond memories where he helped put together a ballgame against the Texas Rangers Coaching staff. Proceeds helped fund the various non-profit organizations in the area.

Joe recounted how the events he helped create fed hundreds of families and how he would pack up the extra food after these events and drive up and down 41 pulling over to feed every homeless family he came across. He said, “To see the smiles on their faces was worth every effort I made.”

Today as Resource Officer at Sallie Jones, Joe’s involvement isn’t limited to providing security for these children he is so passionate about, he continually implements new programs that he hopes will become a standard within each school district.

In his “Bicycle Pedestrian Safety” program aimed at kids from kindergarten through 5 th grade, he uses an egg to show the importance of riding with a helmet. To generate enthusiasm to wear a helmet Joe created a contest where children from kindergarten through second grade get to design their helmet with the winners being recognized in front of the Punta Gorda City Council.

One of the most intriguing programs Joe has created is the “Watch Dog” program where he and the Assistant Principal have a host of fathers and male figures come into the school to provide that “father figure” role for many of the single parent children who don’t have a father as a role model. Under strict supervision these men not only keep watch for bullying in the playground and hallway, they come into the classroom to help children in need of some additional academic tutoring.

In addition to these two wonderful programs, Joe teaches a program on ” Bullying ” whose goal is to teach ” Zero Tolerance .” He is also in the process of developing a “Gun Safety” program for children. Joe explained with the possibility of children going into a home where a gun may not be adequately secured, he wants children to “be aware, to stay away and to report instances where they have seen a gun has been left unsecured.” 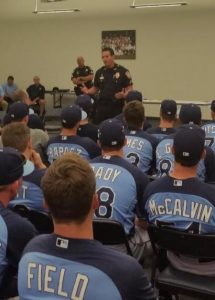 On top of his passion for the welfare of children, Joe serves as an active Board Member for the Charlotte County Fair. He is a member of the board for The Charlotte County Children Services Council, an appointment he received by Governor Rick Scott. He is a Volunteer member for Back Pack Kidz of Charlotte County and mentor for Take Stock In Children, an organization that mentors high school students in Charlotte County. He is a volunteer member for Young Life, a national non-denominational Christian organization for middle and high school students, and for the past two years is an Impact Panel Board Member for the United Way, where funds are voted on and distributed to a host of local organizations. In addition, in conjunction with Team Punta Gorda, Joe has participated in Habitat for Humanity’s “Paint Your Heart Out Punta Gorda.” He sits on the Board of Directors for the Boys and Girls Club and Board of Directors of the Homeless Coalition. Joe has also served as guest server for the “Tip a Cop”  fundraiser put on by the Punta Gorda Police Department which benefits SpecialOlympics.

Now somewhere in between being a full time Punta Gorda Police officer, getting his Bachelors degree in Criminal Justice and Law Enforcement Administration, along with all the charitable organizations in which he is an active member, Joe is a Board member and Secretary for the Police Pension and for the past 2 years has been giving presentations to seniors and various organizations on how to avoid becoming a victim to a host of scams that have been on the rise.

For most, Joe’s resume for community service would leave you breathless, however, with a burning desire to do more for those in his community, Joe recently announced his candidacy for the position of Sheriff of Charlotte County . Typical of all law enforcement agencies, Joe explained their primary responsibility is “paramilitary” in nature, but Joe’s goal as Sheriff would bring more of a “business model with an emphasis on customer service ” side to the department. He said, “We need more of a community service approach where people can depend on us to help them in a host a ways, which can mean changing a tire for someone broken down on the side of the road to answering a call for the homeowner who left town and doesn’t remember if they left their home secure.” It is this passion for people both young and old alike that Joe outlines in a 10-point plan where he hopes to build a stronger bond between the department and the general public it serves . 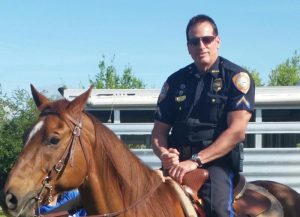 You only have to meet Joe once to see the enthusiasm and passion he has for people. But I didn’t fully comprehend how much of that “service to others” approach he embodies until I was getting up from our interview and without missing a beat he said to me, ” If there is ever anything I can do for you or your family let me know” …….little does he know, he already has!