You are here: Home / Selling Real Estate / Housing Market Update In a Nutshell 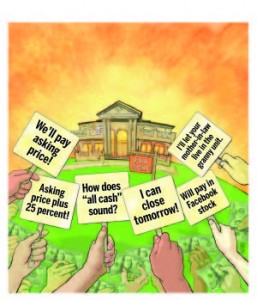 Unless you haven’t been watching the news or seeing the number cars with out of state license plates traveling our roads, let me tell you there has been a tremendous increase in the number of people who are now calling Florida “home” on a full time basis. As I’ve mentioned many times in our previous newsletters, last January we were hearing people saying it was the inclement weather and high taxes that had them strongly considering a move to Florida however, when Covid hit, it changed the market dynamics.
No longer did people want to live in densely populated areas, commute via mass transit and work in the tight quarters of commercial office buildings. Employers found production levels didn’t decrease as anticipated and were now allowing their employees to work remotely. As a result instead of waiting for retirement to move to Florida, they were making the lifestyle change now, and for some cities, it has become a mass exodus!
Florida and Texas are two states seeing a tremendous influx of people looking to relocate on a permanent basis and with very low inventory levels the competition for existing homes has been fierce. In fact some of major builders such as Lennar have put a “sales hold” on some of their developments so construction can catch up with sales.
Recently we had three of our listings sell in one day, and well over full price. Our most recent listing had 28 confirmed showings within 12 hours and 15 offers, with the accepted high offer almost $80,000 over full list price….yes, you read it correctly! Agents were telling us of their frustrations in not having their offers accepted when bidding $20,000, $30,000, $40,000 and more over list price. Buyers who wanted to give some thought to the home they viewed before making an offer found themselves on the outside looking in as the property went pending shortly thereafter.
While this may seem reminiscent during the real estate boom in 2004-2006, it is a very different scenario. Sub-prime mortgages and other forms of loans were being approved for buyers who under normal circumstances would never have been able to qualify. Inventory levels were much higher and the speculation that baby boomers were headed to Florida for the next 20-30 years had everyone giddy the sky wasn’t going to fall. Appraiser’s couldn’t keep up with the increases and started giving valuations on properties that were called into question years later.
What you are seeing now are not only retirees, but those looking to make lifestyle changes prior to retirement, both vying for short supply of available properties. Unlike the market back in 2004-2006, this market is not being driven by investors and speculations. We are in a market where there is strong demand and short supply. With the cold weather now hitting the north, those that were contemplating a lifestyle change are acting with a sense of urgency, adding an additional strain to an already robust market. Sensing their opportunity may be slipping away we have seen an immense uptick in offers well above list price. What was a market characterized by gradual growth, we are now seeing the realization by some this may be their last opportunity for some time and are willing to pay a premium for it.
As always if you have any real estate questions, feel free to reach out garycardillo@wesellpg.com 941.916.0939